Although the reverend and statistician Thomas Bayes wrote his seminal paper "Essay toward solving a problem in the doctrine of chances", published in 1763, after his death. The formulas that we now see in textbooks are a further development due to the re-invention of the Bayes theorem by Laplace (1774).

Philosophically, the theorem is about cause and effect. While one normally predicts an effect from a cause, Bayes turns the problem around and asks which is the most likely cause, out of several possibilities, that produced the observed effect?

In terms of probability this can be formulated in three equivalent ways. First the complete form:

An equivalent simpler form is using joint probabilities, or intersections:

Version 2 is useful to understand bayes rule using the Venn diagram as explained further below. The simple version is:

The bayesian approach led to a heated discussion amongst statisticians, partly because of the element of subjectivism in estimating prior probabilities. For some "probability" is only the ratio of two counts, or the frequency of an event divided by the total number of events. The subjective probability is then nothing more than a "degree of belief". For an interesting account of the history of rejection by the "frequentists" and acceptance of the bayesian method by the "bayesians" I recommend the book by McGrayne (2011).

The result is denoted as "posterior" and this forms the "update" of the prior information.

The prior information can be completely subjective, but it is better to have some database to tabulate and count experience. Then we can better specify prior probabilities or distributions.

Many decisions taken in daily life use a non-formal bayesian logic: If you go for a walk, you either take an umbrella, or you dont. When you open the curtain and see a dark cloudy sky, you adjust your prior probability about rain, which is some meteorological experience to a posterior probability that is higher than the prior.

Exploration is typically a process where we slowly gather information. In a virgin area, it will be difficult to know if source rocks are present. Now we could, in despair, say that we have no idea at all about source rocks in sedimentary basins (the completely blind man in the above quote), or we could use our world-wide experience that tells us that basins are more likely to contain at least one source rock than not ("half-blind", because this data is very general and may not really be representative for our particular virgin basin).

New information may come in the form of geological age of this virgin area, say Jurassic to Cretaceous. Undoubtedly, this will affect our prior in a positive way.

It is this process of adjusting our views and probabilities at every step when new information becomes available. In the process a prior becomes a posterior, which in the next phase of updating becomes a new prior, and so forth.

Graphical explanation with a Venn diagram

A graphical explanation of Bayes theorem is a Venn diagram. We take an example from the Dutch North Sea. Gas can occur in both the Permian Rotliegend as well as in the Triassic Buntsandstein. The source is the deeper Carboniferous. The observed success rate in the Bundsandstein is overall 20%. we take this as a prior probability of finding gas in the Bundsandstein (Bunter). Permian salt separating the Permian from the Triassic is not everywhere present, either non-deposited, or removed by halokinesis. This allows migration from the Carboniferous source to the Bunter, but a proper salt seal is likely to prevent this migration. 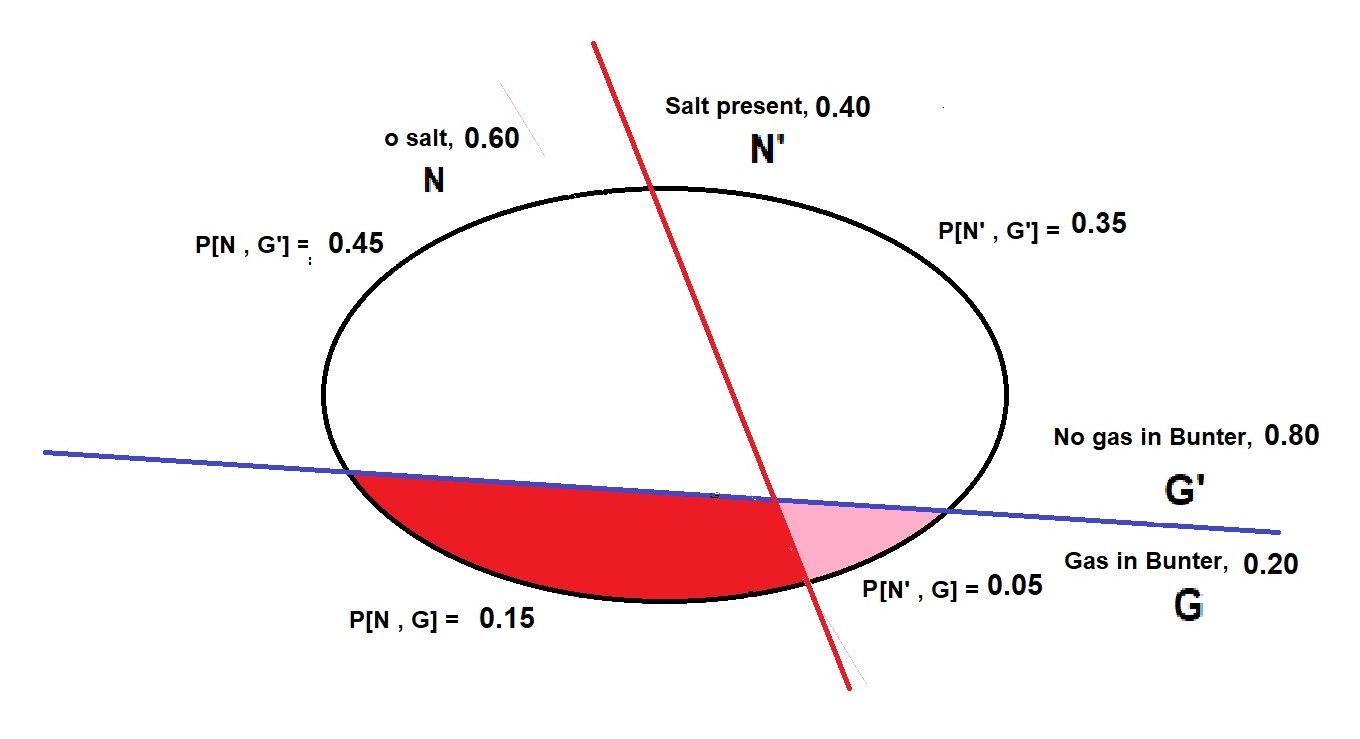 The total area of the diagram is equal to one. The four areas divided by the red line between N (salt) and N' (no salt) as well as the blue line separating G (gas in Bunter) and G' (no gas in Bunter), represent the joint probabilities. How did we estimate these areas? By counting the experience from the drilled prospects. What we are interested in is the posterior (conditional) distribution P"= P[G|N]. Having the joint probabilities as areas in the diagram, we use bayes-formula 2 (intersections) to get the conditional probability P[G|N]. We also show the calculation in numbers.

We can also rewrite formula 1 with our letters and numbers;

Here we see that P[N,G]= 0.15 can be expressed as the area P[N] times the fraction that the gas area occupies in the N part of the diagram, so only looking at the area left of the red line, or with P[N,G] calculated using the areas in the diagram below the blue line. Finally we rewrite the simple rule as follows'

In Bayes parlance we want a "posterior probability" P" from the combination of the "prior probability" P' and the new information in the form of "likelihood ratio" P, by some called "bayes factor". The easy way is to use "odds" (a typical bookmakers' term) as in the formula in words above, where the odds associated with a probability P is P divided by (1 - P). This ratio is normally the ratio of two probability densities, see for instance the bayesian discriminant analysis. The Bayes rule can be written in words as follows:

and the LR for the example is calculated as:

The odds-formula for the above example is:

In the case of independence of N and G, the likelihood ratio would be equal to one and P"= P'.

Application in play and prospect appraisal

Newendorp (1971) suggested the use of the bayesian method. In the appraisal systems that I developed for prospects and basins/plays, I used bayesian logic as far as practical. The applications are the following: