The normal distribution is the most common type of probability distribution, found in many widely different branches of science. It is usually ascribed to Abraham de Moivre (1667 - 1754), but very often referred to as the Gauss distribution. De Moivre was assisted by James Stirling (1692-1770) who calculated the constant which is required to make the area under the density curve equal to one:

in the formula for the density distribution (pdf):

The "standard normal distribution" has a mean of 0 and a variance of 1.

Unfortunately, the Cumulative Distribution Function (cdf) has no analytical expression and the cumulative probabilities have to be approximated numerically. The same holds, of course, for the inverse normal distribution. To generate random normal numbers from random uniform numbers several algorithms have been invented. Thomas et al. (2007) give a very good overview.

A simple one I used, when no great accuracy is required is the following: Take twelve uniform random numbers, add them up and substract 6 from the result. Why? Because a uniform random number has a mean of 0.5 and a variance of 1/12. Summing the 12 independent numbers, the result is a mean of 12 times 0.5 is 6. The variance is the sum of variances: 12 times 1/12 is one. So the result minus six gives a standard random normal variate with mean zero and variance one. The disadvantage is that the tail ends of the distribution are not very well modeled in this way. 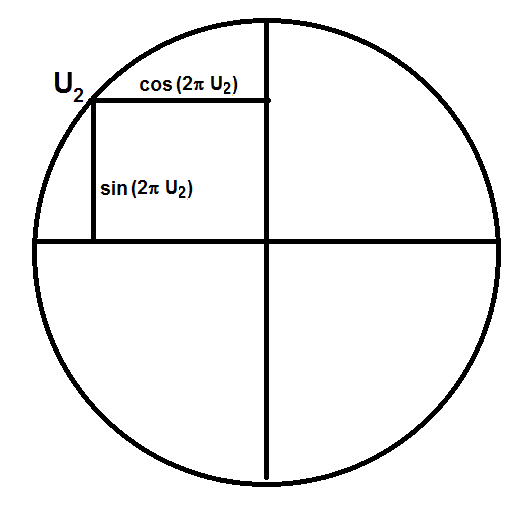 In the above cloud of points we see no correlation, otherwise the cloud would be elliptic in shape: the random draws in a pair are independent. Here is a sample generated by the algorithm:

For an explanation in more detail and the optimization of the algorithm for computing see Wikipedia for "Box-Muller transform".