With Petroleum system estimation we refer first of all to the methods employed by the US Geological Survey. Such a method applies to a petroleum province, or a basin, in which the petroleum system is sufficiently uniform to make an intelligent guess about the prospectivity. If more geological information can be obtained, a more quantitative analysis of the petroleum system can be made, not only for resource assessment of plays as a whole, but also for individual drilling prospects.

The most common systems, such as from White & Gehman (1979) split the appraisal problem into two parts: (1) The chance of fulfillment and (2) Volumetrics. 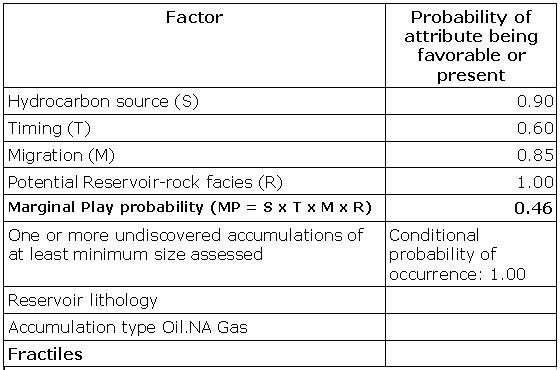 The elements that are involved in the above scheme should be independent from each other. Otherwise the multiplication of the probabilities would give a misleading final probability. What is also essential is that each ingredient in the list is a so-called "sine qua non", which means that when its probability is zero, the prospect/play is doomed, despite favourable other factors. For instance "no reservoir", but excellent sourcerock and maturity, etc, invalidates the prospect or play.

Some schemes try to subdivide the above fulfillment factors (also called adequacy factors) in sub-factors. For instance reservoir involves presence of the formation, net-to-gross, porosity, water saturation. Here again, independence is required. The product of the sub probabilities is then the probability for reservoir. Basically, this procedure just expands the list of fulfillment factors. So, similarly, in the case of a stratigraphic trap, we might expand "Seal" into top seal, seat seal and lateral seal. Again if any of these fail, the prospect fails.

A warning should be given here: never ever take the mean of the probabilities of the sub factors! The result would be meaningless and invariably lead to an overestimation of the chance of fulfillment. As an example I give a scheme I encountered: 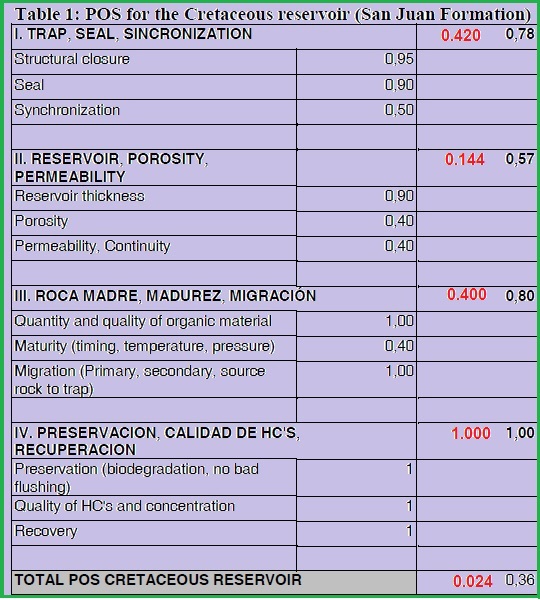 The black numbers represent the "average probability" of the sub-factors on the left. If we consider the sub-factors as independent then the probabilities should be multiplied instead of averaged. The red figures in the probability column are obtained by multiplication and the correct ones in my view. It will be apparent that the overall POS of 0.36 is wildly wrong, because it should be 0.024! Why is this? Because if there is a puncture in a car tube,it does not help that other parts of the tube have no puncture... ; the averages state of the tube might be something like "0.01% punctured". That sounds like a woman saying "I am a bit pregnant". (Moreover, in this example there is some overlap between group of factors I and III with regard to timing, which means there is some dependence amongst the subfactors). It seems that the logic is flawed.

White (1993) explains in his guide for play/prospect evaluation (which we will refer to as "PP") how he multiplies the sub-factor chances, and hence the resulting factor prospect POS is as in the above corrected calculation. The only possible misgivings/comments I have with the PP scheme (which is widely used) are the following:

Even chart as a petroleum system overview.

This PP system of estimation is mostly applied to "assessment units", such as plays, in which, on the grounds of geological homogeneity, it can be assumed that field sizes form a single distribution. An important documentation that accompanies an assessment is the "event chart". This shows the times of deposition of the essential rock units, trap formation, generation, migration and entrapment of the hydrocarbons and the preservation (Bishop, 2000).

An event chart usually has a horizontal axis for the geological ages and a vertical axis with the important geological events as shown in the following picture: 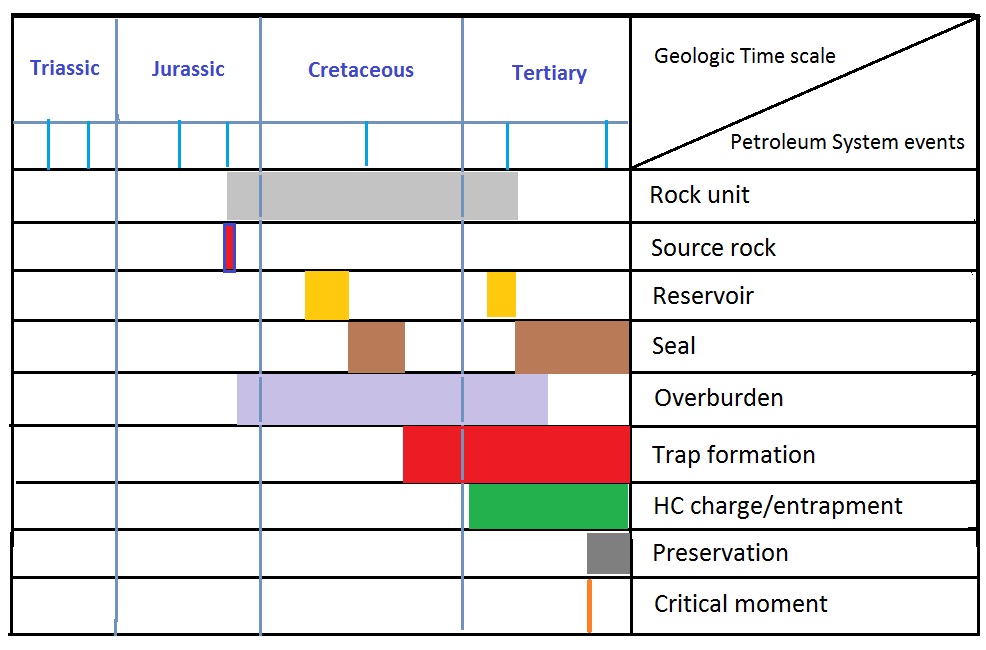 In a play-based prospect evaluation (e.g. Rose & ass.) use is made of "Fairway Maps" which summarize the areal extent of the important factors, such as described above. The specific prospect POS is then reconciled with the play POS. The fairway maps of the play are constructed by overlaying separte maps for source rock, maturity, reservoir, etc.