"Our ignorance is not so vast as our failure to use what we know".
King-Hubbard.

King Hubbert studied the production data of the US in 1956. He used a logistics model, the well-known "S-shaped" curve that describes so many economic processes for a finite resource. His forecast of the peak of United States (Lower 48) was remarkably accurate and made him famous in the petroleum industry. The curve is due to Belgian mathematician Verhulst (1845). Many examples have been given in the Club of Rome studies to show the limits of growth. The start of production is slow, but then picks up speed exponentially as it spreads over a wider area and becomes more efficient. For various reasons (e.g. creaming) a peak in production is reached, whereafter an exponential decline follows. The derivative of the logistics curve is similar to the gaussian curve. If a good fit is obtained of the first half, the total resource can be estimated to be twice the already produced resource, because of the symmetry of the curve (if the process fits to such a simple symmetrical model).

As an example of a logistic process I once fitted a simple logistic curve to the cumulative number of countries that had been entered for exploration globally, but USA, Canada and the then Communist areas were excluded because of lack of information.

A similar pattern is observed for sedimentary basins entered. The logistic growth is also known from how waterlillies gradually cover a pond. At first, the food supply is ample but when too many waterlillies compete for dwindling resources the rapid growth slows down and eventually comes to a stop.

The mathematics of the logistic curve is relatively simple: The function is expressed as:

Where Q(t) is some cumulative volume or other variable of interest, while t represents time (e.g. years). For the simple logistic we have a pivot point at half the ultimate value of Q. The parts of the curve above and below that value are symmetrical. The best way to fit the curve to a set of data is explained in the following conceptual graph, which uses not the final volume Q but the fraction of that volume reached at time t: 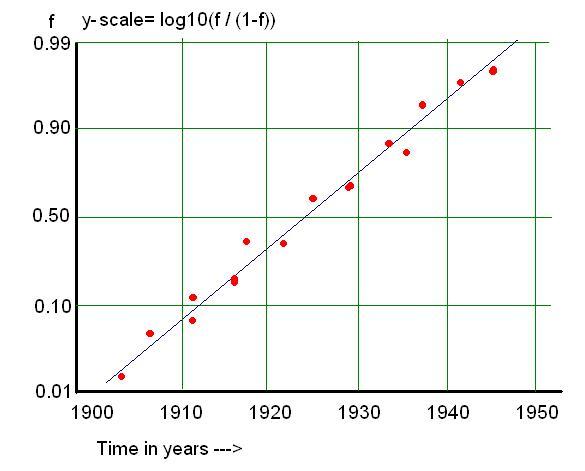 We know the Q(t) and t values, but we have to assume a value for Q( ∞). A linear regression gives the straight line through the points plotted. Note that for f = 0.5, the ordinate becomes the logarithm of (0.5/(1 - 0.5) = 1) and hence = 0 as Log(1) = 0. The base of the log does not matter. By trying various values we will eventually focus in on the best estimate of the final volume, because the linear fit will be best for that value. Of course there are iterative procedures to estimate it efficiently. In the case of the countries entered by exploration we knew the final number of countries. (History has taught us since that countries can fall apart into more countries....). Similarly to countries, the final volume estimate may be a moving target. The extrapolation is only valid for the technical and economic conditions of the moment. Anyhow, Hubbert was hailed as having so early predicted that the USA domestic production peaked in the seventies. See also a recent analysis by Towler, 2011.

Uncertainty of logistic extrapolation volume
The final result is subject to two uncertaionties:

The fossil fuel and resources forecasts are a great subject for scientists, economists, planners and hobbyists. An assessment of gas and oil resources in the sedimentary basins of China used logistic techniques for estimation (Jie Zhu et al., 2010 and Chenglin et al., 2011). I also recommend an interesting website www.peakoil.net.

The total global petroleum resources have been estimated many times, and the mostly increasing estimates might suggest that there is no end to these resources. However, the estimates are including ever more possible resource domains: first conventional oil on land, then the shelf is included, later the deep water, the arctic, the bitumen and heavy oil deposits (Venezuela, Canada), the shale oil (which in a few years time completely changed the outlook of US domestic oil production), oil from distilled oil shale ("source rocks"), advances in recovert efficiency, economics (higher oil price) etc. But it is likely that eventually our fantasy runs out. An iteresting review of applying the King-Hubbert method to estimate the global resources is given by Towler (2011) and Inman (2016).

Similar estimation has been applied to natural gas. here again a distiction can be made between "conventional gas" and several types of "unconventional gas." A review of unconventional gas resources and the possible future development is given by Nederlof (1988). Unconventional includes gas from tight reservoirs in clastics (often involving fracking) , coal-bed methane ("CBM"), aquifers and gas hydrates on- and off-shore. The amounts estimated of these resources dwarf the total estimates of coventional gas.

Now almost 30 years later, we can modify this graph, especially with regard to the timing of the peaks. However, the principle appears sound. The Tchernobil disaster happened three years later in 1986, and threw a spanner in the works for nuclear energy development. This effect was exacerbated by the 2011 nuclear disaster at the Fukuchima nuclear powerplant in Japan. Oil and gas are going to be dominant for a longer time, while the advent of solar/wind etc. is slower than foreseen. Nuclear fusion is still far away. However, it is an enlightening graph that is useful in energy-scenario planning.