Expectation curve showing an economic cutoff volume and
the location of the MSV on the volume axis.

This is a typical example of an expectation curve (or "exceedance curve"). The curve of interest here is the green one for black oil. Others are for condensate, total liquids and oil-equivalent.
A zero outcome can not be plotted on this semi-logarithmic graph. Therefore a very small volume is adopted as a pseudo-zero volume: 100,000 barrels. There are in the Monte Carlo simulation 69% cases that exceed this "zero"volume. We call this the "geological POS", or POSg. (Also called "COS" or "COSg", using Chance instead of Probability). The expectation (54 mb) is the mean of all possible values, i.e. including all the zero outcomes. Another term for this is "risked mean". We could, in principle, do an economic evaluation on the basis of the average volume of the non-zero outcomes. That would be the "unrisked mean", not shown, but it is, in the example, the expectation divided by the POSg = 54/0.69 = 78 mb. We might call this unrisked mean a "Mean Success Volume" or MSVg. Note that the "g" in MSVg indicates it is only the geological MSV. However, "success" may exaggerate the financial value of the prospect as explained below.
This mean (MSVg) includes a fair number of cases that are unlikely to be economic, hence irrelevant to the analysis. To avoid this we establish a cutoff volume (20 mb) above which it is worthwhile to make the cashflow calculations. By this truncation we change from

The MSVc is the important parameter extracted from the expectation curve for the purpose of economic evaluation. The analysis is done "as if" the MSVc was found. This results in a net cash surplus for a realistic success case. Finally this cash surplus has to be risked by the POSc. Misunderstandings about this logic could be quite detrimental to exploration! Consider a case that has a (geological) expectation e.g. of 20 mb and a cutoff of 30 mb as economic minimum volume. Presenting the prospect in such a way would kill it as the 20 mb would give an uneconomic result for the cash surplus. However, the MSV might be considerably above the 30 cutoff.
Note that in the insurance business our MSVc can be compared to "tail conditional expectation", a useful measure to estimate the size of a disaster beyond a certain minimum accident. Other terms in use for MSVc is "commercial mean" and "truncated mean".

The Low, Middle and High MSV

A refinement of the above MSV system is to consider three parts of the Expectation curve. The three parts are chosen to be equally likely by dividing the POSc by three. An example: A prospect has a cutoff of 20 mb. The POSc is 36%. The MSVc = 66. Instead of using this 66 mb as a reasonable case we can make three evaluations called Low, Middle and High, which in this example turn out to be 28, 52 and 119 mb. Each of these cases is equally likely at 36/3 = 12%. A good reason to apply this more detailed analysis is the effects of economy of scale, or fiscal implications. Note that the average of the Low, Middle and High MSV is equal to the MSV proper.

A graph of the whole expectation curve may clarify what is meant by the Low. Middle and High and the associated probabilities. 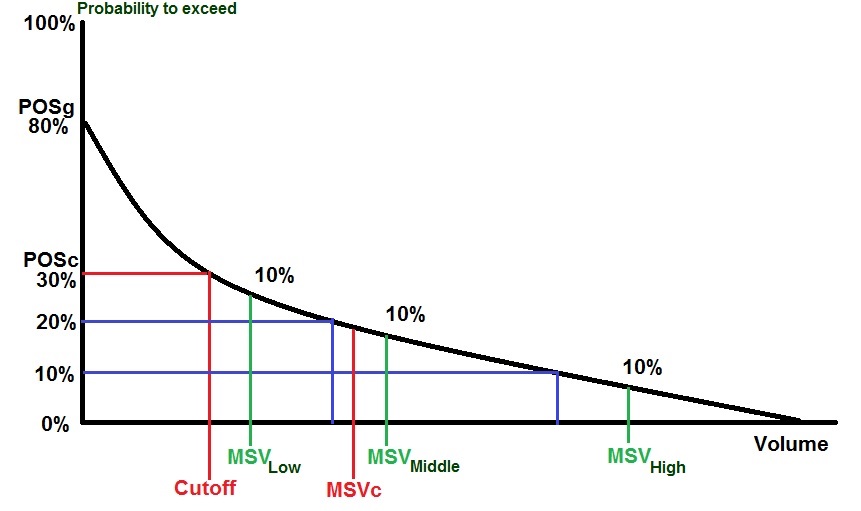 The widely used terms of Low, Best and High estimates look similar, but are not equivalent to the above Low, Niddle and High Success Volumes. They are just the usual percentiles P90, P50 and P10.

The following table of a hypothetical example with a small number of Monte Carlo cycles may show the logic more clearly. Note that in this example the economic cutoff has been assumed to be zero. In reality it usually not! So here the POSc = POSg and the MSVc = MSVg


It will be clear from the calculation in the table that the MSV values can not be interpreted as the well-known percentiles P90, P50 and P10, but as three branches of a "Chance Tree". Each branch has a probability of POSc/3. These serve to refine the economic evaluation leading to the Expected Monetary Value.

In the graph we have not indicated the mode (most likely value). This corresponds to the steepest part of the curve. The expectation curve above has two modes: at zero and about at 10 million barrels. It is more meaningful to consider the unrisked curve, which does not have a mode at zero. The unrisked mode stays the same at approximately 10. For economic calculations the mode has little meaning.