Estimation of the amounts of oil or gas in the subsurface comprises two techniques, depending on the size of the object and the state of information about it: resource assessment and prospect appraisal.
Resource assessment is important on a global scale, or down to a country. Prospect Appraisal in the context of oil and gas exploration is the process of assigning a qualitative, or quantitative value to objectives that range down from an entire basin, via concession, group of prospects, individual prospect to a faultblock. This process is multidisciplinary because it involves many branches of geology, geophysics, etc. making a team effort essential. 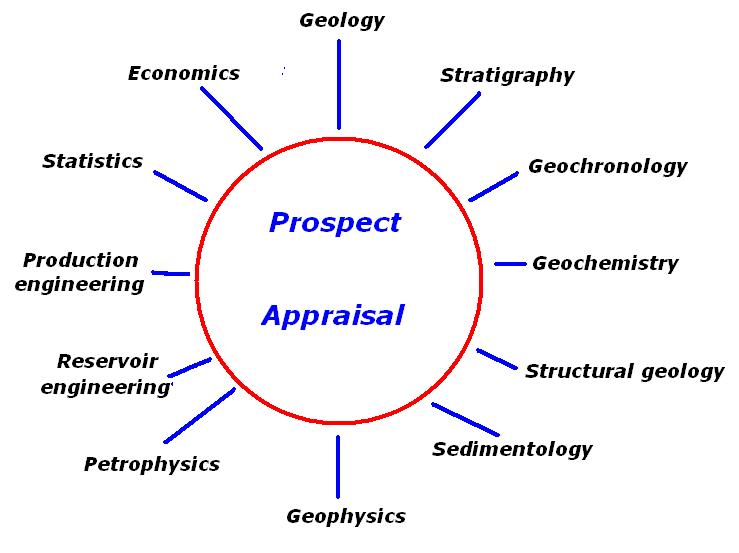 For prospect appraisal, a set of usually incomplete data from various disciplines have to be discussed by a team of specialists to come to an evaluation of the investment opportunity. This results is a mixture of subjective estimates, based on specialist experience as well as statistical data and methods. In a formal appraisal a "model" has to be used, which is a conceptual description of the geological situation, say, a "petroleum system".
The description of the petroleum system used by the industry comes in various grades of sophistication. The simpler the system, the more one relies on subjective estimates of the "ingredients", i.e. input variables. The more complex models attempt to describe in detail, and quantitatively, the workings of the petroleum system. In such case it becomes possible to reduce the subjective element by a combination of experience databases and statistics.
Some methods serve to produce an estimate of hydrocarbons in place, without any consideration of producebility and economic value, leaving that to other evaluation teams. The type of output of appraisal is typically quite different for a country government or an E&P company.

Resource assessments require usually the summation of smaller assessments. For a country one might sum the results of evaluations of basins, provinces or prospects, possibly in a hierarchic scheme. Other methods are direct extrapolations of historical exploration results or use multivariate analysis of large entities such as basins or plays.

The terminology with regard to reserves and resources has evolved from the early attempts to get an agreed definition at the WPC 1979 to the the following scheme in 2007 (netherlands.spe.org):

Since then the SPE revised the "Guidelines for the Application of the Petroleum Management System" again in 2011. The over 200 pages are a very useful introduction for production as well as for exploration resource/reserve definitions.

This site is mainly concerned with "Conventional Oil and Gas", where accumulations are reasonably limited by structural or stratigraphic elements and the result of migration from source rock to trap. However, during the last decades, the importance of "non-conventional deposits", although well known, became clear. Now we distinguish conventional and "continuous" resources. The methods of estimating are different as well (Schmoker,2005). Examples of continuous resources are the Athabasca and Orinoco oil/bitumen sands, the Bakken source rock, Marcellus shale, Methane hydrates, etc.

In the Soviet Union and the later Russian Federation the resource classification was quit different from the international standards. It was not easy to equate their terms with the SPE definitions. However, a new classification is suggested there, or already implemented. See RF classification. It corresponds nicely with the SPE.