This is the most complete of the GAEA50 options. The simulation model is calibrated on a worldwide scale in an approximate manner from published sources. This calibration has predictive power that in statistical terms is explaining some 60% of the observed variance in the learning set. However, the user can make a new calibration using his own proprietory data and "update" the worldwide prior parameters of GAEA50 in his local situation to improve predictive power. This calibration involves mainly the charge and the retention phases of the simulation.

The statistical methods used at various steps in the FMB model, omitting dynamic entrapment are:

The bayesian update of the P[HC] or Chance Factor for Charge is in two steps as explained above. Here is an example, where locally there are four indications (well results) that generation and migration had taken place and no negative indications:

The prospect specific data are used in a bayesian discriminant procedure. Analysis of hundreds of well-described cases gave a discriminant function to distinguish between "HC-charge" and "no HC-charge". The variables in this function are:

The update process of the second step is graphically shown in the following figure, (another example), where the discriminant function gave a "discriminant score" that embodies the effect of the specific geological situation: 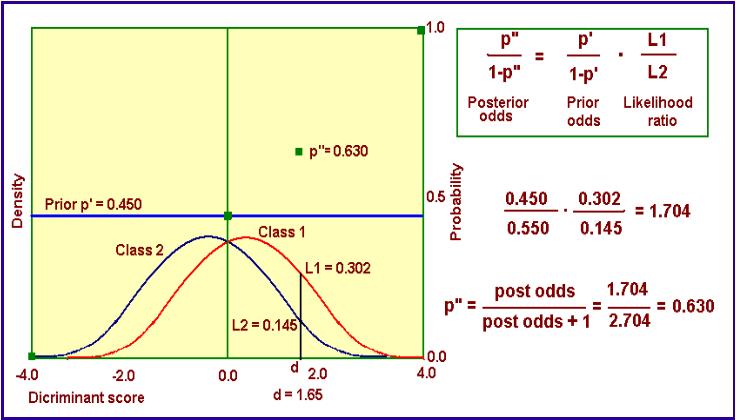 The entrapment phase is a fairly complicated part of the simulation. It allows for storing any HC that are in excess of the trap capacity for later use in an adjacent prospect (Spill) and also for a combination of such previous overspill with an FMB charge. 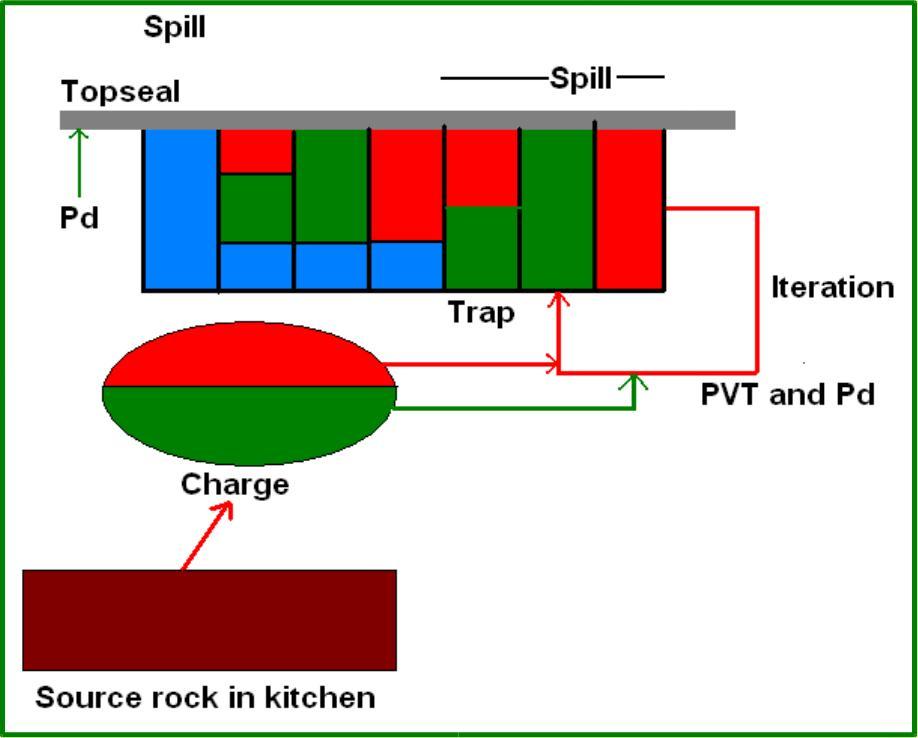 The entrapment model with a number of possible outcomes"

The entrapment phase also handles the retention by limiting entrapped volumes through the top and seat seal calibration, as well as the input statements for lateral spill/leak point. In the upper-left of the diagram the "Spill" refers to the spill-point of the trap that may limit entrapped HC. On the right the spill symbolizes the interaction of entrapped HC and the top-seal capacity (Pd or differential pressure). A iteration in small steps finds the equilibrium volume of oil and gas that are entrapped. This may result in spill through the top seal.
PVT stands for Pressure-Volume-Temperature conditions that are modeled at the sub-surface conditions of today, and/or the paleo sub-surface conditions in the case of dynamic entrapment.

A final sub-option of the FMB has been included for those who have their own sophisticated charge modeling: direct input of charge as a volume distribution of oil and of gas under "External charge". Such input can be combined with any other input under FMB. The external gas input then refers to total gas, i.e. the sum of solution gas and free gas and is in volumes at standard conditions.
The external charge allows to create an "infinite charge". This ensures complete fill the trap. The same could be achieved by manipulating the HC column length in the column option, or with a contact at the spillpoint under the contacts option. However, with FMB, the modeling is slightly more sophisticated because the top seal will affect the results. The Column and the Contact options have no top-seal modeling; top seal is assumed to be perfect. The user has probably any seal failure into account when estimating a HC-column or the position of a HC-contact.

The FMB requires at least some minimal knowledge of the source rock and maturity conditions around the prospect. For instance, for one or two SR a burial or geohistory graph must be made, preferably at various points of a drainage area. Also some information on the trap timing would be required if the most complete sub-option with paleo-fill is being used. Obviously, in practice such detail information may be lacking. In such cases it may be better to roughly estimate to what extent a trap might be filled with HC, by the Column or Contact options, described below.